Our Egg Hunt at Rockingham Castle 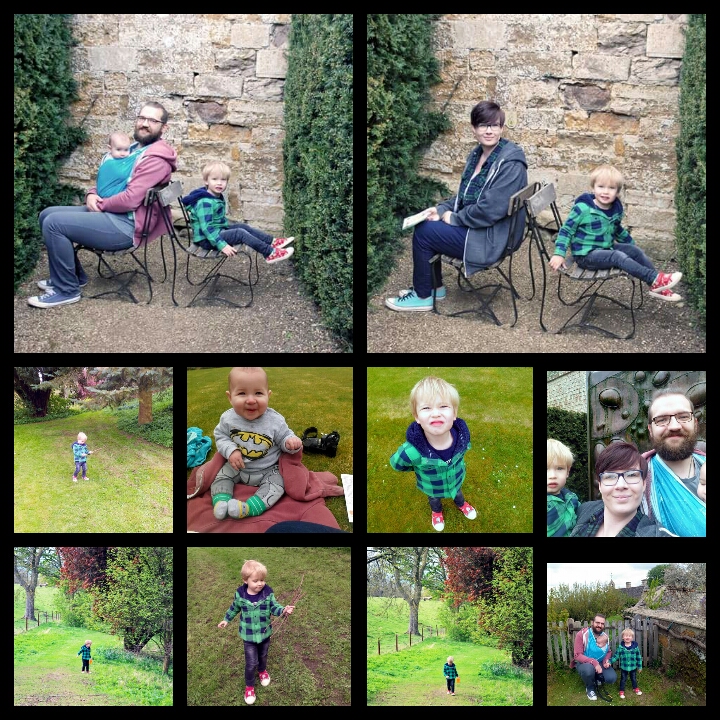 Our second hunt this year took place at Rockingham Castle. It’s a former royal castle and was constructed in the 11th century. William the Conqueror ordered it to be built and many a royal has visited. It fell into disrepair and Henry VIII acquired the castle. He gave it to Edward Watson who turned it into a family home and it’s been in the Watson family since, a good 500 years.
I’ve visited once before, probably about 5 years ago, before I’d met G and we’d had the boys. I’ve never been for the egg hunt though, this was the first year I’d heard of it so I didn’t know what to expect. We had a choice of two prices, paying for just the event which gave us access to the grounds or paying for access to the castle as well. As G had never been, we decided to go for the full access one. This time, it was £27 for entry to the castle, grounds and the hunt. The view walking from the car park to the castle is stunning..

And walking through the arch into the castle courtyard is impressive, just seeing the castle come into view is amazing..

We’d received our maps at the entrance so off we set! The idea of this hunt was to find animal cards around the gardens and fill in their names. There were 10 of these to find and there was also little eggs with letters on which we had to unscramble and make an Easter related word. Apparently, there were also gold eggs dotted around the gardens and if you found one, you had to bring it to the tent and you could get more chocolate. Unfortunately, children and their families had cottoned onto the fact the castle workers were hiding the found eggs again so they were snatching up a few eggs at a time. It was highly unfair and ruined it for everyone else. Despite this, we had fun. The gardens are beautifully looked after. You couldn’t ask for a better setting to go running around, looking for clues.

The hunt didn’t take us as long this time. We only spent about half an hour trying to find everything and we couldn’t find the last clue for ages! We ended up having our picnic while looking for the last clue because it was taking so long. Eventually we found it and we went to the tent to return our sheets. The boys got 2 crème eggs each and we got one as well. I thought this was a bit stingy, I could have bought 6 of those in the shops for a couple of quid! For nearly £30, I was expecting a little bit more.

We then went for a look around the castle. I love places like this, I find the history around them fascinating. I’m not usually a history nerd but castles and stately homes, I really get into those. It’s not a huge castle as it’s also the home of the family who own it so a lot is off limits. We did go up the tower though which, with a 2 year old and a baby in a wrap, wasn’t our best idea! The steps were so narrow and windy. Nevertheless, we made it up and down again in one piece.
We still had an hour and a half left before the gates closed by this point so we decided to explore more of the gardens. It was lovely to be away from the hustle of the castle and the hunt. It was so quiet once we’d stepped away, it was perfect. H decided he’d had enough of walking halfway and I had to carry him which wasn’t easy. Especially when G got us a little bit lost! We eventually found our way back to the car though, much to the delight of everyone!

Overall, it wasn’t a bad hunt. It was a lovely day and I’d happily go back to the castle again but I don’t think I’ll do the hunt next year. The clues were a bit naff and weren’t really to do with Easter. And the prizes weren’t worth the money we’d paid. But it is a stunning place and I’d recommend a visit to anyone who lives nearby.