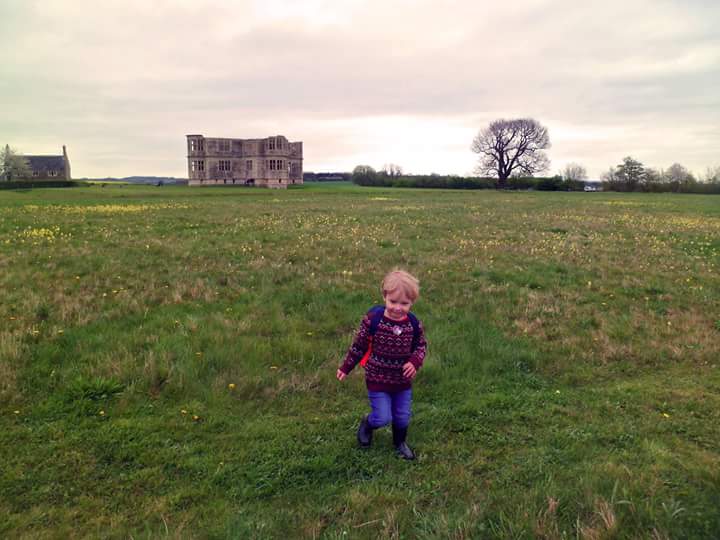 As a rule, we don’t really celebrate Easter. We’re atheists, although my partner follows a lot of the Viking mythology. So we don’t do any of the religious stuff associated with Easter but the long weekend is a great opportunity to spend time with family, celebrate life and love and eat a lot of chocolate!

H is only just starting to understand these holidays. So when he saw all the chocolate eggs in the shops, he started to ask questions. I explained it to him the best I could. Then I saw an advert on TV for the Cadbury Egg Hunts, the hunts were all done at National Trust sites and our nearest one was half an hour away. G was working all weekend but he had the Thursday, Friday and Monday off. So on Friday morning, we packed up the car and off we went!

We arrived and drove up a long and very bumpy road..I was worried for my car! But we made it in one piece and parked. As we followed the signs for the start of the hunt, the house came into view. It’s an incomplete building as the owner died and his son was involved in the Gunpowder Plot! I won’t bore you with all the historical facts but it has a fascinating story behind it. It’s surrounded by fields, moats and wooded areas. It’s a beautiful place.

Once we’d paid and received our maps, off we set! The clues were hidden in little plastic boxes set around the site. In the boxes, were laminated information sheets about the plants and flowers that grew around the site. We had to find the answers to questions and then work out the Easter related word using letters from our answers. There were about 10 boxes to find and H had great fun, running around trying to find them. He loves being outdoors and doesn’t care about the weather. He was in his element.

When we’d finished, we returned the completed sheet to the hut and H received a Cadbury’s chocolate bunny. He wanted it there and then, he wasn’t even going to entertain the idea of waiting! We decided to go and get a cup of tea while he ate it, we could clean him up then and he wouldn’t get chocolate all over him in the car! We sat outside and took in the beautiful view of the tea room cottage. It was a lovely way to finish the day!

The day cost us about £20. We were going to bring a picnic but the weather looked too cold. In hindsight though, we probably could have done! It’s​ definitely something I’ll do with the boys again, year after year. I think it was good value for money, we spent about 3 hours there. It was the best hunt out of the two we did this year (not including the multiple ones we’ve had to do at home!) You can read about our second Hunt at Rockingham Castle here!