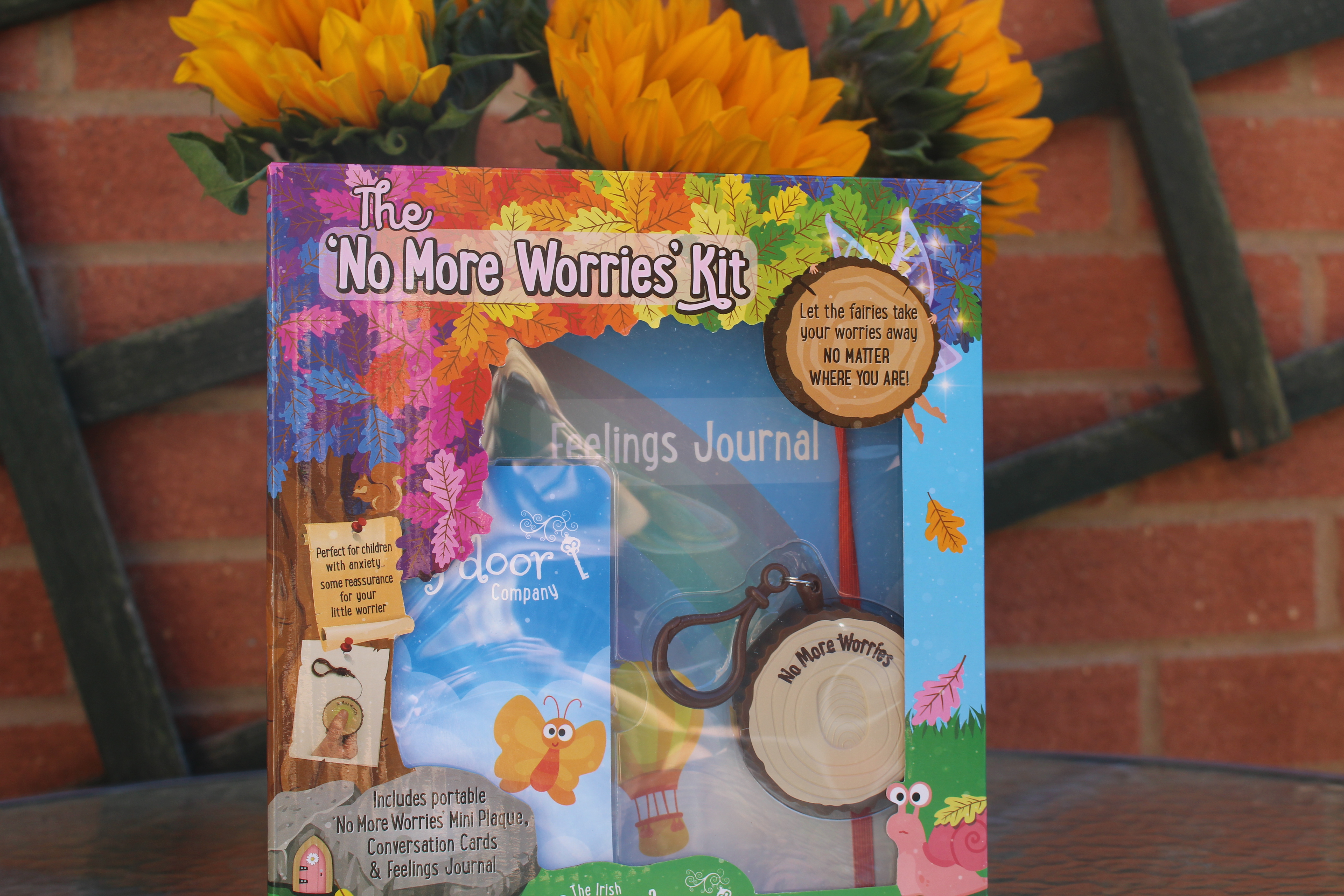 Henry is now at the age where he doesn’t deal well with his emotions. Anything and everything can turn him into a smaller, less green version of the Hulk and I find it really difficult to deal with. Obviously I know that it’s hard for him as well but I just can’t seem to reason with him when he’s in that mood. He needs something to distract him from the situation, me trying to talk him down doesn’t work at all.

We were lucky enough to be sent a “No More Worries Kit” from The Irish Fairy Door Company. You must have seen them before and if you haven’t, Google them. They make the most beautiful and intricate fairy doors for you to put in your home and garden which attract the fairies and make them want to visit you. It’s a great activity for young children, I’ve thought that the boys might be too young but they’ve got on well with this kit so we might buy a door and who knows? Some fairies might visit us soon!

Back to the kit…the idea behind it is that when your child has a worry or something which is stressing them out, they press the mini log and think about their worry. It turns red when the fairies have heard the worry and green when they’ve taken it away. Henry has grasped the concept wonderfully, he’ll have a tantrum and then remembers about the worry log. He’ll ask if he can “send his angry” to the fairies and once he does this, his meltdown is gone. They do a bigger version of this, it’s a plaque which you can hang in your house but the best thing about the mini one is that you can take it out and about with you. It has a little clip which you attach to your bag or wherever and then there’s always that reassurance for your child that the fairies are listening wherever they are.

Also included in the kit are these amazing conversation cards which we haven’t used yet, only because I don’t think Henry understands talking through his problems. However, I’ve had a look through them all and I think they’re a great idea. I’ll be keeping them aside for when he’s a bit older and we need to talk through why he’s been angry, what caused it and how we can stop it happening in the future. I’ve also kept the “Feelings Journal” away from them both because I know for a fact that it would just get used for drawing and colouring. It’s supposed to be used by your child to write down their thoughts and feelings whenever they feel like it and then you can talk through it with them. This will also come in handy for both boys when they’re older.

If you’re looking for a way to help manage your child’s meltdowns and emotions, I would definitely recommend getting one. It has been invaluable to us and saved us all a lot of worry, stress and tears!

Disclaimer: We were sent this product free of charge in exchange for an honest blog review. All views and opinions expressed here are my own, it hasn’t affected what I’ve said nor have I been told what to write.