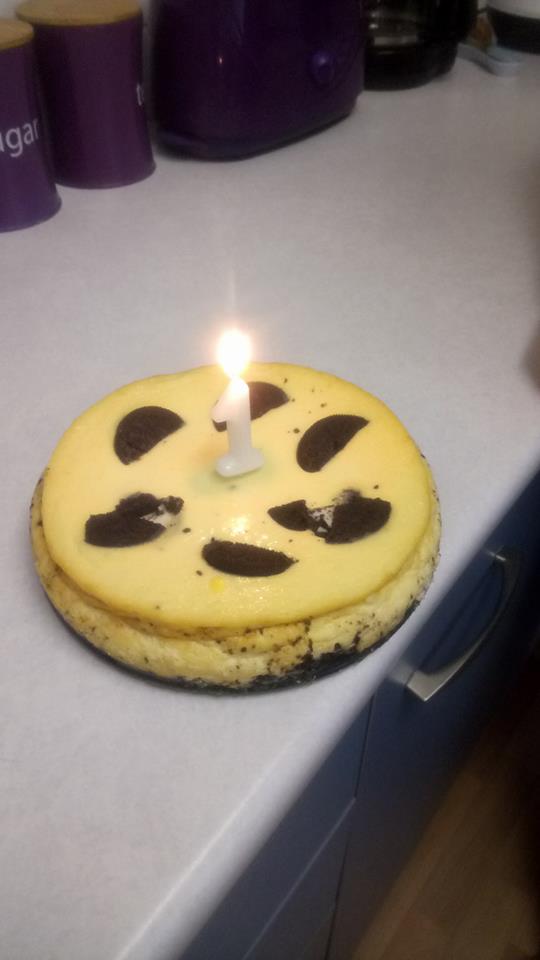 I know, this post is nearly 2 weeks late and I’m ashamed. It’s just felt like life has been going at 100mph lately and I’m only just sitting down to write this. So, here we go..

Archer turned one on the 26th August. I had so many feelings in the run up to his day. I was sad because this could be the last first birthday we celebrate. It also meant that the tiny newborn I brought home had turned into a toddler and my days of being a mum to a baby were over. But I was also excited. I know how much joy this next stage brings. The first words, first steps, his first proper Christmas dinner (yep, I’m excited for this!) are all important milestones and I can’t wait for them. Archie’s first year hasn’t been easy and I haven’t been shy in admitting that but it’s made me a better mother.

We started off the day opening his presents. I was worried we wouldn’t know what to buy him but he actually did really well. I’m trying really hard to steer away from the typical bright plastic toys and buy more wooden toys. Plastic toys are full of chemicals and wooden toys last longer, they’re more durable. He got things like a wooden walker, wooden ice cream set, wooden safari truck with animals, clothes, bath toys and a “That’s Not My Dragon” book because that’s a rite of passage isn’t it? I wasn’t sure how Henry would handle it because the only other birthday’s he’s witnessed have been mine or Gareth’s and we let him help us open the presents. But he was fine actually. We bought him and Archie matching t-shirts for the day so we wrapped that for him to open. We then had a full cooked breakfast and set off for the farm.

West Lodge Farm Park is located in Desborough near Kettering. We’ve been once before, back in 2015 and I really liked it. There was an event on over Archie’s birthday weekend, “The Great Big Fossil Hunt” which we thought would appeal to Henry. I was a little disappointed with this though because it didn’t feel like there was much to do surrounding this. We found a small tent with a few sandpits where children could “find” fossils and there was another tent further away from the farm but it was quite a walk with the pram so we didn’t go.

Luckily Henry loved the farm. With all of us, plus a tractor ride, a pony ride for Henry and animal food, it cost about £25 which I thought was very reasonable. There’s so much to do here at this little farm. All of the animals are contained in one place but there’s extra walks around the farm, including a troll bridge! We did this the last time we went but I didn’t think Henry would cope with all the walking this time (he gets really crabby when overtired!)

When we arrived, the pig racing was about to start. Yep, you heard that right..pig racing! The pigs race around a circuit and you can bet on which one you think will win. Mine didn’t win (obviously!) but it’s great fun and something you can really get involved in. Around the edge of the circuit were some goats which were a good distraction while waiting for the pigs to race. The weather was beautiful, a little too warm for what we were wearing but in our defence, it had been raining that morning! We saw all the animals, chickens, rabbits, goats, sheep and ducks before it was time for lunch.

We usually bring a picnic on days out like this but with it being Archie’s birthday, we decided to have lunch in the café. Henry had a “pick and mix” lunch bag which had a cheese sandwich, crisps, a yoghurt, an apple and a drink in. Me and Gareth both had a roasted vegetable baguette which came with salad and coleslaw and Archie had bits of everyone’s. This cost just over £20 and if I’m honest, it wasn’t really worth it. The vegetables were burnt, not roasted, and the waiting time for our food was a bit long. It wasn’t awful, it just wasn’t the best I’ve ever had.

We can’t go to a farm without Henry wanting to go on the tractor ride, that’s his favourite bit. This one only lasted about 10 minutes but he loved it. Archie, not so much. He always squirms and wriggles on a tractor ride and I don’t think it’s very safe feeding him while bumping up and down. We learnt about the twin sheep that had been born in August (late lambing!), the cows that were in another field and what the crops were used for once harvested. Henry really wasn’t happy that it had finished but he soon got over that when we told him he could ride on a pony. He’d never done it before and I wasn’t sure how he would be with it but he had a great time. His pony was called Max and he enjoyed it so much that I’m thinking of taking him to riding lessons. They also have a barrel ride which is included in the admission price. It goes around the play area (which is quite big) and both boys loved it! Me and Gareth barely fitted in a barrel!

If you want to watch our first ever vlog about the day, click here. We’re still new to vlogging so please excuse it not being perfect but we’ll get there!

All in all, it was a really lovely day. Nothing ruined it, it was nice and easy and what better way to finish your first birthday than with Daddy’s signature Oreo baked cheesecake?