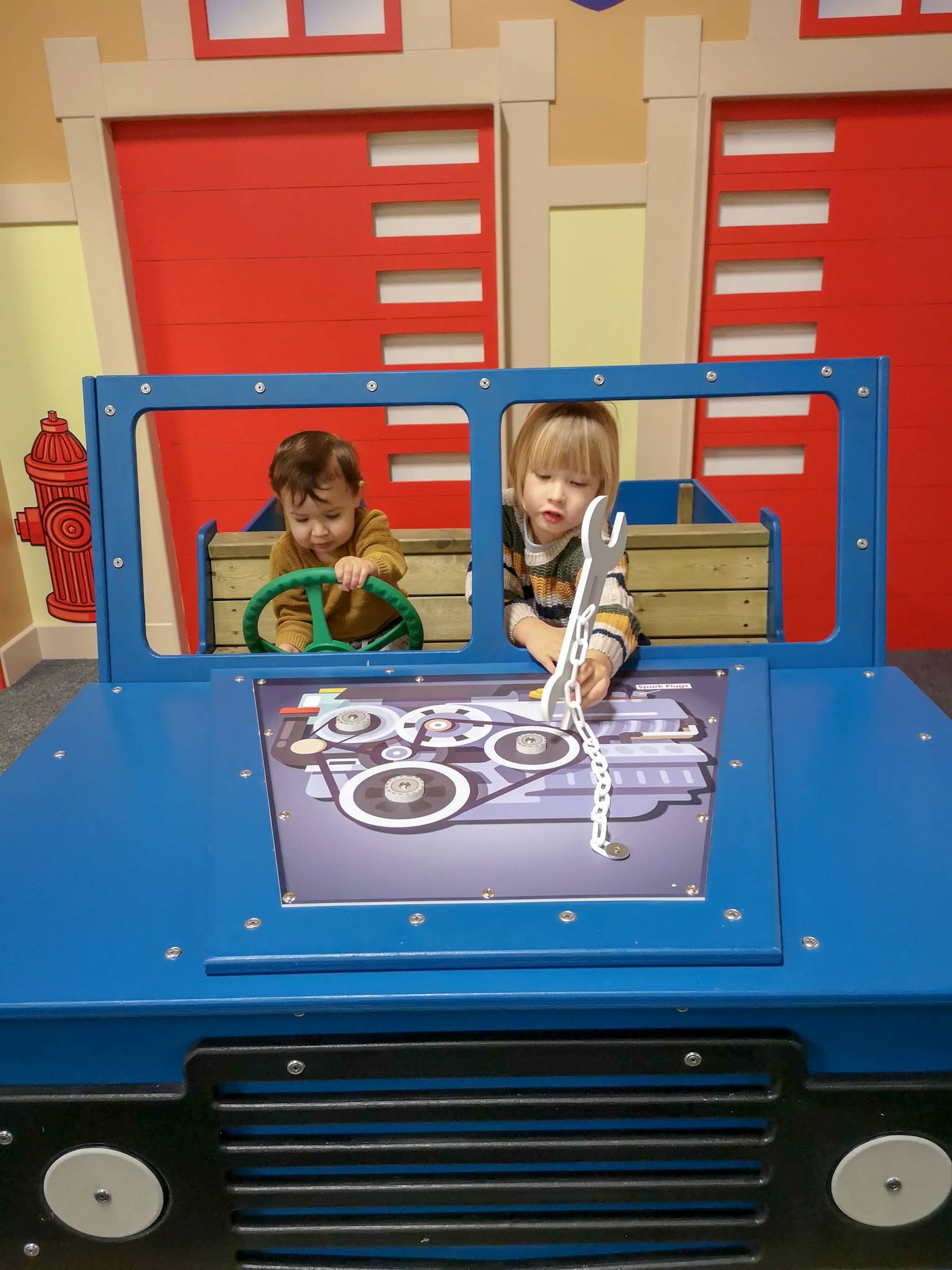 Last Monday, we were lucky enough to be invited along to the opening of the new 360 Play Rushden Lakes. As a general rule, I can’t stand soft play. Children get overexcited, I can’t keep an eye on both boys at the same time and they always have a meltdown when we leave. So when we were asked to go to the opening of 360 Play’s 7th centre, I was a bit dubious. But I didn’t need to be.

As you walk in, there’s a colourful carousel to your right, lockers ahead of you to put your coats and bags in and then you enter 360 Street. This is where we spent most of our day. The boys had the option to choose from a number of pretend shops, from a supermarket with baskets, lists and plastic products to a vet surgery with so many different animals to nurse back to health. Don’t forget the pizza parlour, mechanics, the boutique and the post office! All three of us had so much fun, going from shop to shop and exploring the different roles that were available. It’s great for homeschooling as not only were they playing, they were also learning how different establishments work. They still talk about the post office and it’s almost two weeks later!

Nestled in amongst 360 Street is the Messy Play Area. I’m all for messy play, just not in my house. I hate the tidying up! When I noticed this area and the boys wanted to have a go, I was all for it! They made me and Gareth a Valentine’s card each and they’re so cute; they now have pride of place in the kitchen. As well as the crafting table, there was also a mini digger area, with toy trucks and some soil, along with some sinks so you don’t have to carry a messy child to the toilets when they’re done!

Behind the Post Office in 360 Street, you’ll find some dodgems. We tried to have a go on them but because Henry had to go in one on his own, he couldn’t figure out the controls. He looked very upset as Archie and I zoomed past him. We gave up on those quite quickly but we’re looking forward to going back with Daddy and trying again.

Then there’s the Main Play Frame. This is the bit I was dreading; it’s essentially soft play. But it was big enough for me to follow the boys around while they explored and once we discovered the slide, we didn’t want to go on anything else! With three lanes, it was perfect for the boys to sit either side of me and have a race to the bottom. Opposite the Main Frame is a little Toddler Area for the Under 4’s. When I only had Henry, these areas were perfect for me as I didn’t have to worry about the bigger kids knocking him over.

Halfway through our visit, the boys decided they were hungry. We visited the cafe to see what options they had and I was pleasantly surprised. There was a wide variety of hot and cold foods for both adults and kids, plenty of choice of drinks and they even serve breakfast. It was lunchtime by the time the boys wanted feeding so I got them a lunch bag each. For £3.95, the boys got a sandwich, a drink and three other snacks (they wanted a flapjack, some mini gingerbread men and some crisps). I was offered a latte when we arrived and it was delicious.

360 Play has taught me not to tar all soft play centres with the same brush. Even though there is a soft play frame, the majority of the centre is the role-playing street. The way it’s designed is to encourage families to play together instead of parents sitting at a table while their children burn off some energy. This definitely wins them some bonus points with me.

I can see us being regular visitors at 360 Play Rushden Lakes. There’s no time limit on how long you can stay so you could arrive as soon as they open and leave just before closing. I’ve already mentioned getting the boys annual passes to Gareth, maybe for their birthday or something. If you have a 360 Play nearby, I highly recommend going along and checking it out. You won’t be disappointed.

Disclaimer: we were given our tickets for the day in exchange for this review. We also registered free of charge (this would normally cost £5).

All opinions expressed are my own and I haven’t been influenced in any way.